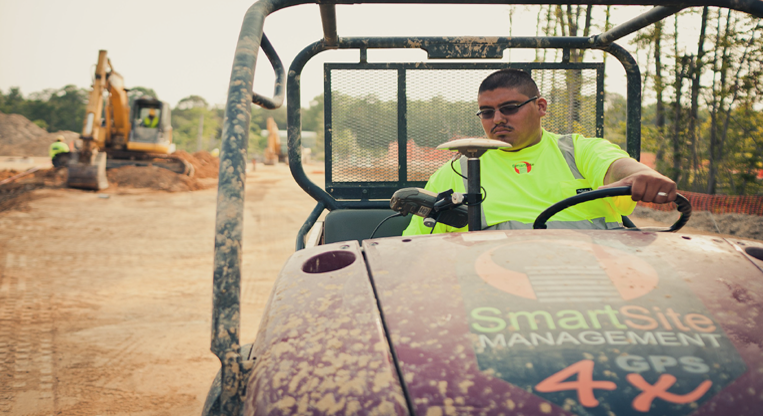 “We are always looking for ways to improve our business process, be more profitable, and gain a competitive edge,” says Doug Meeker, a vice president at Elm Street. “I saw this delivery method as a way to not only lower my initial bid for site work, but also as a way to control change orders and costs as we go through the project.” At one point, Meeker says the delivery process saved Elm Street about $150,000, or nearly 10 per-cent of the contract’s value.

Meeker said he has developed a close working relationship with SmartSite management. “I’ve known Frank Duduk, Pat Hobbs, and Paul Gray for approximately 10 years,” says Meeker. “I have the utmost confidence and trust in their abilities, their professionalism and their judgement. I’m able to trust the recommendations and information I get from SmartSite, and that allows me to make quick decisions to keep the project moving forward.”

The delivery method has evolved from a construction management process that SmartSite first developed for St. Charles Community, Maryland (Site Prep magazine, Cover story, August 2011). There, SmartSite used the BIM to award and manage separate contracts for earthwork, the sewer system, the water system and so forth. But at Chelsea Manor, Jimmy Richards & Sons is doing all phases of site prep.

“We are always looking for ways to improve out business process, be more profitable, and gain a competitive edge.” SmartSite partner Frank Duduk explains the difference between conventional lump sum bidding and the delivery process at Chelsea Manor. “We level the scope more fairly by integrating experience and technology in a very easy-to-understand and transparent way. The worst bid should not earn the job. With our process, it is virtually impossible for a negligent bidder to be awarded the job. And we think that’s a good thing for our clients and the contractors we work with.

“We have had contractors who made very costly quantity mistakes thank us for showing them the problems – even though they lost the job because of the corrections,” says Duduk. “Alternatively, our clients don’t want to be trapped into a contract with someone looking for the opportunity to make themselves whole on the first change order either.”

With traditional methods, earthwork risk is much more difficult to establish due to outdated surveying methods and paper plan scopes. “The model takes the quantity risks out of the equation for everyone,” says Duduk. “Proper planning and analysis with the model, combined with topographic volume reports, prevent a lot of problems regarding quality risks, re-handle risks, and material misallocation risks. Those affect everyone – owner and contractor alike.”

Meeker explains the delivery process at Chelsea Manor. “The first thing that I did was contract with the design engineer, who prepared construction plans required to permit and build the site improvements. When those plans were approximately 90 percent complete, I brought in SmartSite to begin the procurement phase of their scope of work. Also, during that time I executed a contract with the geotechnical engineer and Modeling firm to provide construction engineering surfaces. Once SmartSite finishes the procurement phase and moves into the implementation phase of their work, I finalize the contracts with the contractors that I have selected to do the site work.”

One of SmartSite’s first tasks is to create the first-generation AIA BIM Modeling Protocol Document, which sets standards for all clients and stakeholders who are going to use the model. “It sets up a base of information of what they can expect, what information will be provided, how it will be laid out, what we are available to do, what we can offer them and so forth,” says Paul Gray, BIM Manager at SmartSite.

“The biggest thing I like about this process are the regular monthly progress reports. Also, we get instant access to on-site information that we need in order to make important decisions. This kind of information would normally take me a lot of time to integrate in the traditional manner and may not happen in time to help with real time problems. With this information, we don’t have to guess if we’re missing important details that would affect either change order cost or quality. The fact that the geo-tech is a hands on part of the process ensures us that his tests and recommendations are precise based on the pro-posed design and his actual location.

Because this is a customized process for us, there were definitely some problems getting started, but those got ironed out pretty fast and it has been smooth ever since. Now that the first job is behind us, we have been able to start two new projects with the same reporting progress without these startup difficulties. After all, in the end, we are still moving the dirt in the same way we always did, we are just doing it with better information and a higher confidence level that we are in control of it all.”

From the owner’s standpoint, Meeker says that SmartSite helps integrate the engineering disciplines with project delivery. The process integrates the intent of the design engineer with the construction engineer’s requirements for stakeout of the work. The delivery process also integrates the geotechnical engineer’s requirements that firm needs to verify that all the work is done according to project specifications. “And that is all wrapped together and integrated through the building information model that is created during the procurement phase,” says Meeker.

In the implementation phase, SmartSite collaborates with the design and construction team and bidders to create value engineering solutions. Perhaps money can be saved by changing a method or procedure. The firm finalizes the construction budget based on the final BIM model and contract documents.

Every month during construction, the owner receives reports that lay out cuts and fills in many various areas, imported soil in several areas, and unsuitable material management in several areas. The original quantity is noted for each of those in one column, and subsequent columns list changes by month in each location of earthwork.

“We provide monthly reports to give each manager and superintendent detailed information, per the scope, about what has been completed to date, what is yet to go, what is wrong, and what is right,” says Duduk. “This basic information is derived from ongoing progress topography compared with existing grades to measure what has been done.

“The same progress topography is compared to the design model to determine how much is still to go and how closely the work meets client tolerances,” says Duduk. “We have to get the topographic shots at the end of a contractor’s pay period so that the volumes measured against the last month reflect a con-tractor’s billable earned revenue. We do that by comparing last month’s progress topography to the new progress topo.”

Meeker says the geotechnical engineer is on the site at all times during earthwork, doing soil testing. “The idea was to train him with a Topcon GRS 1 Data Collector so that he could also be collecting 3D points as he is testing,” says Meeker. “It was SmartSite’s idea to verify quantities. The information that he collects is added to the model and SmartSite is able to produce progress reports on demand. I can call them up this afternoon and get various earthwork progress reports that are up-to-date through, say, yesterday.”

Eddie Henderson, the lead geotechnician on the Chelsea project for Bob Taylor Engineering, says his reporting process is streamlined and easy to do. Topographical data gets emailed to SmartSite. If a building pad has to be undercut because of unsuitable material, Henderson collects grade shots before and after the undercutting. “That way, SmartSite and the owner know exactly how much of the unsuitable material had to be removed,” says Henderson. “So it’s much easier for the billing process.”

Verifying undercuts and earthmoving quantities by using the BIM helps remove risk, says Gray. “With these data points that we collect, we know exactly how deep the contractor cut based on the existing ground,” he says. “Also, we do special case reports that define what the actual strip quantities are and the structural fill requirements. The results almost always trigger adjustments to prevent paying unnecessary additional costs.”

At one point during the earthwork at Chelsea Manor Phase II, the contractor encountered a situation that called for a quick resolution. The solution saved the owner some $150,000 and three or four weeks of delay.

“Because we were reporting topsoil strip volumes on a monthly basis, (through RTK GPS technology), we were able to predict where we would be several months later if topsoil depths remained somewhat constant,” says Duduk. “By projecting those volumes forward, we concluded that we would need more structural fill material, and the job was already at a structural fill deficit – while also exporting additional topsoil. This was a worst case scenario for our client – and timing is everything.”

Adds Meeker: “We ran into a situation where we had quite a large volume of unsuitable material that we could not use in green space. Using the model, we were able to calculate exactly how much of that material we had. A plan was developed to mine the site so we could use good material to make site fills – and then fill the mine pits back with unsuitable material.

“That literally took a couple of hours going back and forth,” says Meeker. “The calculations are almost instantaneous. We were able to come up with a plan so that there was no delay for the contractor. We were able to give him specific instructions in how to proceed without risking a large change order cost. There was a change order, but it was a fraction of the cost of the alternative if we would have had to truck all that unsuitable material offsite and then truck in good material to replace it. The mining quantity was approximately 7,000 to 8,000 cubic yards.

SmartSite’s Gray sums it up: “The model really gives us a handle on the site as a whole. Our data collection allows us to do volume reports and daily reports that compare the current grade with what the ultimate grade is supposed to be. The model allows us to predict and see where we are falling in line with what is projected.”

Meeker likes the control that Smartsite’s re-ports give him. “First, they allow me to efficiently manage varying site conditions such as top soil, root depth, and unsuitable material,” says Meeker. “With the BIM, we can do fast and accurate evaluations – multiple ‘what-if’ scenarios to develop value engineering solutions. It helps steer the project in the right direction.”

Daniel C. Brown is the owner of TechniComm, a communications business based in Des Plaines, IL. For more information, visit Dan at www.technicomm.org